On the mound, Daniel Schlereth has the potential to be the epitome of an ace closer.

The Arizona Diamondbacks’ top pick in 2008 out of Arizona has a fastball that’s been clocked in the mid-high 90s, a power curve and the ever-popular bulldog demeanor. 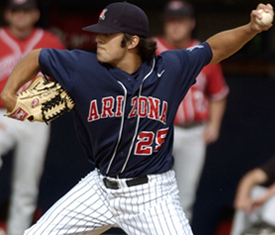 But off the mound, he’s kind of a teddy bear. Hope I’m not outing him by saying that, because it’s meant in the best possible way! At the recent Rookie Career Development Program, he was the first guy to show up for his interview, per request of my colleague Jonathan Mayo.

Easy going and laidback, it’s hard to imagine him in that context of going-for-the-jugular pitcher. Even harder when he shared that he’s been taking yoga classes this off-season to work on his flexibility.

But I suspect his affinity for yoga and fishing and hanging out in the great outdoors (he is from Colorado, after all) simply adds to his package … he can bottle the energy for the mound and be totally chill off of it.

Just to give you a few details on Schlereth, to make some of his answers clearer, his dad Mark was a longtime offensive lineman in the NFL.

“I think it’s one of my biggest advantages, being around my dad and seeing what he went through,” Schlereth told Jonathan during his interview. “It’s a different sport but the same mentality goes into it. It was an advantage to be around the pro athletes and see the grind they go through. I think I’m ready.”

Schlereth also underwent Tommy John surgery back in 2006 and missed time after that with a ribcage injury. But he got healthy and hot at the right time, flashing high 90s on the radar guns in the last few weeks before the draft to send his stock soaring even higher.

GotMiLB: Of what accomplishment, on or off the field, in your life are you the proudest?

DS: I’m probably the most proud of getting drafted this past year. I’ve overcome a lot of injuries and obstacles to get to this point. So I would think this 2008 draft was the best accomplishment so far. I’ve only played a month of Minor League baseball.

GotMiLB: What do you think you’d be doing now if you weren’t playing baseball?
DS: I’d probably be dong something with my dad, something with football, or possibly coaching. My fiancée is going to be a schoolteacher so maybe I could coach at her school. If not that, maybe I’d be a firefighter. It would be something physical.

GotMiLB: Everyone has a “hidden talent.” What’s yours?
DS: I’m not sure. I’m pretty good at fishing, I guess. My fiancée would say I could sing a little, at least I do in the shower. And I can dance a little bit. A lot of little things, nothing special.

GotMiLB: Do you have other hobbies or creative outlets aside from baseball?
DS: I’m an outdoors guy, I like to fish and snowmobile and four-wheel.

GotMiLB: Complete this sentence: It would surprise people to know that I …
DS: Am Japanese. I don’t look it. My mom is half Japanese.

GotMiLB: What is the worst job you’ve ever had?
DS: Landscaping is by far the worst. I feel for those people. Landscaping and construction work are the two toughest things you can do.

GotMiLB: What is your guiltiest TV pleasure?
DS: Right now it’s “Dexter” on Showtime. I bought the first two seasons at Best Buy and we just went and watched them all the way through. It’s kind of twisted but it’s addicting.

GotMiLB: What reality TV show would you kick butt on?
DS: Maybe “The Hills,” because I’d switch it up and bring a rough-around-the-edges character to the show, because all those people seem kind of sissy to me.

GotMiLB: Who was your childhood crush?
DS: I went to a Britney Spears concert when she was sober so probably her when I was in seventh grade, but that faded quick. Maybe Jessica Biel. She’s from Colorado where I’m from and my parents know her parents and I hugged her one time when I was in eighth or ninth grade. So that was pretty cool.

GotMiLB: If you could trade places with one person for a day who would it be and why?
DS: I’d like to be a late night host like Jay Leno or David Letterman or Stephen Colbert.

GotMiLB: Which aspect of life in the minors has surprised you the most, in comparison to what you might have imagined before you turned pro?
DS: I was in A-ball for three appearances this year so I didn’t really get a taste of it but the worst thing were the bus rides after the game. Traveling seven or eight hours after the game and then having to play the next day. I’d heard the bus rides were bad but I didn’t expect that. That was brutal. I tried going to Target and getting a body-size pillow but when you’re sitting next to someone on a cramped bus you can’t get used to that.