I am constantly reminded by my computer-savvy daughter, my music producer husband, my online editors and the poor folks at Comcast customer service who have to listen to me implode about how “the thing” isn’t working, what an utter technological moron I am.

But every so often even I will come across an “app” that I recognize as so brilliant and simple that I wonder how it wasn’t thought of earlier.

Parents, scouts, amateur coaches from all across the globe, meet your new best friend: GameChanger, the brainchild of Ted Sullivan.

In a nutshell, GameChanger, a new free iPhone application, does for amateur baseball from Little League to colleges what MLB’s GameDay does for pro ball.

It brings you, in real time, every pitch, every play, every run of a game. And you don’t have to be computer-savvy to use it, either! 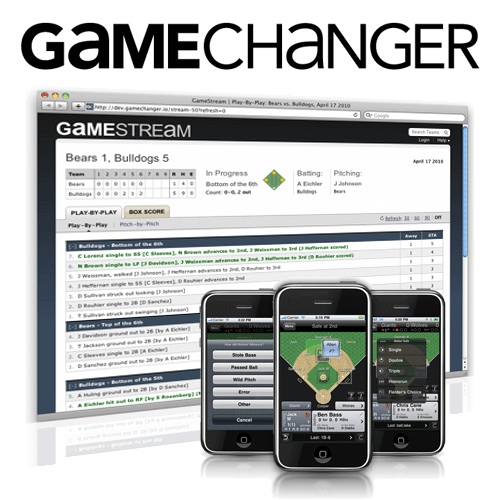 This week, Sullivan and his business partner Kiril Savino will be in Dallas, Texas, for the American Baseball Coaches Association (ABCA) convention’s trade show, introducing amateur baseball coaches from all over the country to GameChanger in what will be it’s official launch.

I have a strong suspicion this will be the start of something very big.

GameChanger is a free application for users that allows them to input “real time” scoring of any baseball/softball game into his or her iPhone. Each play is then beamed immediately to the GameChanger website with the box score constantly updated and real-time play available.

While an iPhone is required by whoever is doing the input (and these days, really, who other than me doesn’t have one?), it’s not required to follow along. Fans can keep track on the web at the GameChanger site or the individual teams’ sites (if they have them) or just on their own cel phones.

This is, needless to say, huge news for any mom or dad who has had to miss one of their kids’ baseball or softball games because of work commitments, meetings, illness, or any other number of conflicts that come up in everyday life.

And for youth athletes’ relatives that don’t live close enough to come cheer them on.

And for the booster clubs of schools and even colleges across the country who want to keep tabs on their Lions and Tigers and Bears (oh my!)

In addition, local online news outlets, ranging from established dailies and weeklies to the ever-more-popular trend of websites devoted to local amateur sports for a given region, will also have the opportunity to add real-time widgets from GameChanger.

This is particularly notable in this sad era where sports journalism is being downsized by economic woes, with one of the first casualties being the coverage of local sports.

The idea for GameChanger came to Sullivan as he read a New York Times article about a company called WePlay, an online platform for youth-based sports teams (not limited to baseball).

“It was sort of a Facebook tailored to families of kids playing youth sports,” Sullivan explained.

The concept intrigued Sullivan, but he also had a vision of focusing more specifically on baseball and what was really needed for the thousands upon thousands of people across the country that were involved in all that sport’s amateur levels.

“To have lots of data and interesting content on a team or player’s page, it takes a lot of effort to get it there,” he explained. “And to expect youth coaches to come home after every game and enter commentary is just expecting too much. So I started thinking that if we could capture the data in real time and deliver it instantaneously to a platform, it could be an interesting business venture.

I’m not terribly surprised that something this innovative and baseball-fan-and-family-friendly would have been developed by Sullivan. I’ve known him and his older brother, Brendan, for more than a decade thanks to my own history covering Minor League Baseball and living in the Washington, D.C. area.

The two, both former Minor League pitchers and D.C. natives, co-founded Headfirst Baseball as an off-season business where they gave private pitching and hitting lessons to local kids. In the intervening decade it has become the biggest youth sports program in the D.C. area and continues to grow.

While Stanford-grad and former San Diego Padres minor league closer Brendan is heading up Headfirst now, Ted, a Duke University product, forged out on his own in 2000 after his two years in the Cleveland Indians system, eventually getting his MBA in 2006 from Harvard Business School.

Through Headfirst, Sullivan has done his share of coaching amateur baseball from Little League on up so he knows first-hand the challenges of finding the parent who will sit there and score any given game while also cheering on his/her kids (had to get the “her” in there since I’ve been in their folding chair).

“I thought it wouldn’t be too long before somebody who was scoring a game with their scorebook and pencil would take out their iPhone to do something slick and sophisticated, and then say, ‘why am I using a paper and pencil to do this when I have an iPhone?'” Sullivan said. “So I thought if we could put this together and capture the time sensitivity of it, with zero marginal cost of capturing that data, there could be an enormous audience across the country that would want it.”

The 18 months since Sullivan first got the glimmer of the GameChanger concept has been a busy period (and not just because he’s also getting married in two weeks). As luck would have it, though, he found two perfect partners for the venture in Savino, whom Sullivan calls “a ninja when it comes to software development,” and Calvin Kuo, who spent seven years in computer programming at MLB.com, who is handling the front-end web interface design for GameChanger.

Sullivan’s background is more in marketing, so he admitted he was surprised to discover just how complicated the creation of the program would be.

“I could do zero from a technical perspective,” he said. “I understood mobile apps, I had worked in business development and I understood what happened behind the scenes, but I couldn’t write one line of the code.”

He has made sure, though, that would not be the case for the users of GameChanger.

Knowing that different parents or fans might be drafted to score a team’s game on any given night, it was crucial that learning how to input the GameChanger data be as simple as possible.

“If we had to hold people’s hands through teaching it, it would never succeed, because we need to grow virally and get it out there fast,” he said. “So what we spent most of our time on was figuring out how to make this incredibly simple and I think we’ve achieved it. We’ve been testing it for six months and I watch people who aren’t even iPhone users pick it up in two minutes.”

Sullivan knows that the fan base he is targeting is devoted but scattered into small clusters. Little League teams might each have 20 parents (and a few tech-savvy grandparents) who want to follow along from home. High Schools
, a few hundred fans, friends and family members. Small colleges, such as Division III powerhouse Amherst College which has already expressed interest in working with GameChanger (and full disclosure is my own alma mater) a few thousand.

So one of the challenges for GameChanger will be for it to spread via word-of-mouth (or computer keyboard).

“We’ve gotten great reactions from the people using it but for something like this to spread, the product is going to have to market itself,” he said. “The person using the product, the scorer who doesn’t have to add up and enter all the stats after the game, the fan or parent who can consume the data at another sibling’s game or while stuck in the office, all of them have to be telling their friends about this for us to be successful.”

Getting the word out to the grassroots of the game will be Sullivan and company’s quest in the coming months, especially as the winter begins to melt away and diamonds across the country start turning green again.

Some folks have already stumbled across it prior to any official launch simply by browsing the iPhone “app store.” As of Jan. 1, over 300 people had already signed up for GameChanger.

Of course, like any work in progress, the technology continues to be tweaked.

The big rollout is planned for this spring, when baseball games start getting played not just in California and Texas and Florida but in all 50 states.

Speaking for myself, I would have loved to have had access to GameChanger years ago when my daughter was playing Little League baseball. I was often the one chosen to keep score (I will say my hand-written scorebooks are masterpieces).

But in her last year of organized ball, the only girl in the league that year, she played for a team led by “Coach Larry” (I don’t think he ever knew my name, referring to me simply as “Danasmom”).

“Coach Larry,” unlike any other coach she had over the years who were pretty laidback and of the “let the kids have fun” school, was very vehement that the scorebook be a little more detailed than you would usually find in Little League. He insisted I count pitches thrown by every OPPOSING pitcher (hello, these were 9-10-year-olds) so that he’d know which pitchers’ arms were burnt out before he chose players for his summer All-Star travel team.

“Coach Larry” would have loved GameChanger. But you, gentle readers, can have it now. Ain’t modern technology grand?

You can find out more about GameChanger at http://www.gamechanger.io or via iPhone’s app store.