Everyone has a holy grail or two. The item — or items — that elude them, tantalize them, tease them. Maybe it’s something huge like a valuable antique baseball card, or an original seat from Yankee Stadium.

Maybe it’s something innocuous but elusive, something from their childhood.

But whatever it is, you’re always on the lookout for it, scanning eBay, keeping a peripheral eye on the shelves at your local supermarket or grocery store, finding yourself pulled into those “antique markets/4,678 dealers under one roof!” places you may drive by one day while on the road.

But the latest addition to it is this:

That’s right. I want an Operation Panda T-shirt (no, not the whole group of guys, just the shirt). I want to wear it in my home office (a fancy name for the crappy Staples desk and Dell laptop where I spend the bulk of my time) and remember how everyone in my 2009 online fantasy league laughed (sure it was online but I HEARD THEM LAUGH) when I chose Pablo Sandoval with my second overall pick in the draft.

I am not jumping on the Pablo Sandoval bandwagon, by the way. I’ve been following the big huggy bear’s career since he was a 19-year-old infielder who appeared in the first Minor League All-Stars Futures Game I ever covered, in Pittsburgh in 2006. (Though this picture was from his 2008 Futures appearance in NYC). I kept following as he moved back behind the plate to his favorite position, catcher, and helped lead one of the best Minor League rotations to great heights in the California League in 2008, catching up with him briefly during the Carolina-California League All-Star Game in Myrtle Beach (below, with his San Jose pitcher Jesse English) before his ascent to the big leagues that September. 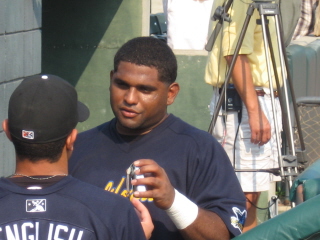 I admired his bubbly sense of humor and his pride in his brand new metal-mouth full of braces that he flashed in January 2009 at last year’s Rookie Career Development Program. And when I heard he’d gotten a bad-bounce groundball in the mouth the following spring, the first thing I thought was “Oh no, his braces!!!!!!”

But the Panda T-shirt is not the only item on my holy grail list (though it is the only one that is baseball-related).

Last night I managed to hit the payload while heading home from dinner with relatives in New Jersey, as we swung into the parking lot of a Shop Rite on Route 1 and cleaned them out of all of the Snapple Mint Iced Tea: 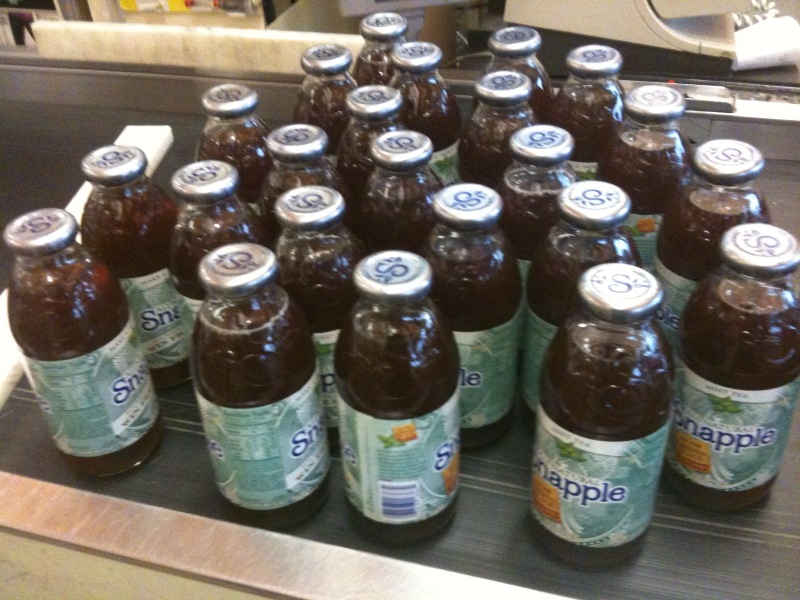 Other items I am always looking for:

The original Clairol Herbal Essence shampoo. I don’t mean any of that new “Herbal EssenceS” crap that comes in every color and nasty fruity scent. We’re talking the real green here, the oddly shaped bottle with the emerald gold that smelled like spring. I saw it on eBay for like $40. $40 for a bottle of 10-year-old shampoo???

Also on the lookout for Coconut Yoo Hoo. The only place I ever saw it was at a gas station convenience store in Clearwater, Florida, right at the end of the Courtney Campbell Causeway. My sister and I would stop there for six-packs of Coconut Yoo Hoo and bingo lottery tickets. Rumor has it that the product was bought out by this other company that calls it Koko Blanco but I can’t find that anywhere either.

One item that was long on my list but now is apparently available on eBay for a reasonably affordable price ($65 per bottle … hey, once upon a time you could only find it for $500 a pop) is my “signature scent” perfume, Andiamo by Borghese. To this day I will run into people I knew when I was in my 20s or even teens who will hug me and say “you still smell like you.” I’m down to my last four bottles of the precious and may eventually have to go back to eBay to stock up my stash but I hold out hope that at some point in the meantime, the folks at Borghese will bring it back, even for a limited time, so I can not only buy the bottles but also the bubble bath and body lotions that use to be part of the gift set!

So what are YOUR Holy Grail items? Share them here, you never know who may have one just lying around that they might want to share!!! (And if anyone happens to have a bottle of Herbal Essence at the back of their closer, you know where to find me!!!)